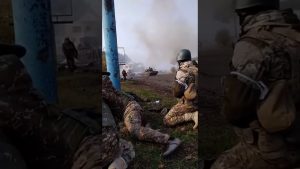 Baku claims that the participation of ethnic Armenians in the hostilities in Karabakh contradicts the norms of international law. Ilham Aliyev, in an interview with the Al-Jazeera TV channel, called such citizens mercenaries: It makes no difference whether they are of Armenian origin or not. But one should pay attention to one important circumstance: only those of the many volunteers who had a valid Armenian passport had a possibility to participate in defensive battles.

It is strange, that Azerbaijan makes such accusations, when there is a lot of evidence about the use of mercenaries in Artsakh (Nagorno-Karabakh) from the Azerbaijani side.

This information was confirmed not only by the Armenian and Artsakh leadership, international media and foreign human rights organizations, but also by representatives of the French and Russian authorities.

France24 presented evidences of mercenaries’ involvement from the Azerbaijani side.

The Ministry of Foreign Affairs of Russia stated that they have information that illegal armed groups are being transferred to the Artsakh conflict zone, in particular from Syria and Libya, in order to directly participate in the fighting.

French President Emmanuel Macron stated that he has precise information that indicates that Syrian militants left the battlefield in Gaziantep to join the fighting in Artsakh.

However, the Azerbaijani policy is unchanged, they were and remain simple falsifiers of history and continue to blame their crimes on others.

Definitely, envy  speaks in Aliyev. Of course, he also would  like to have such patriotic and brave citizens. He is well aware that in this war actually everyone gained a victory,  Armenians, Turks and even the militants, but not the Azerbaijani soldier. Regardless what the corrupt journalists write, what Azerbaijani TV channels show or the corrupt politicians talk about, it doesn’t matter, both “Mr.” Aliyev and the Azerbaijani authorities and of course, any literate person who has ever studied world history, understands well that if we talk about historical lands, Azerbaijan will not be able to claim even a single square meter of land. Instead of chasing foreign patriotic citizens it would be better to engage in education and upbringing of own generations and do not fill their heads with fictional stories.