The human rights violations against Armenians were outlined in the reports of The U.S. Department of State 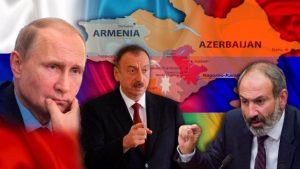 The Azerbaijani authorities accuse Armenia for deploying military personnel of the Armenian armed forces to Artsakh (Nagorno-Karabakh) and with thus not only casts doubt on the actions of the Russian peacekeeping forces stationed there, but also indirectly accuses Russia of violating the joint statement signed on November 10, 2020 by the leaders of Russia, Armenia and Azerbaijan.

Azerbaijan doesn’t stop trying to present Armenia to the international community as a creator of tension in the region. While he doesn’t miss the moment to threaten Armenia that Azerbaijan is ready to achieve the fulfillment of any of its demands by military means. Azerbaijan seeks to ensure that the armistice agreement signed on November 10 was implemented without taking into account interests of Armenia, but only the Azerbaijani and Turkey ones. This applies to the demarcation of borders, the unblocking of communications, issues related to prisoners of war, etc.

The OSCE Chairperson-in-Office, Swedish Foreign Minister Ann Linde during her visits to Armenia and Azerbaijan stated that OSCE plays an important role in finding progress and that at this stage it is necessary to show respect for International humanitarian law and human rights. It is necessary to create an atmosphere of trust. It is clear that all this was addressed to the Azerbaijani authorities, since Baku refuses to return prisoners of war and civilians of Armenian nationality, and also prevents the access of representatives of international organizations, in particular UNESCO, to the territories which are under his control.

Based on false information, Baku claims that Armenian armed groups are allegedly hiding in the territory of Artsakh and announces an “anti-terrorist” operation in Artsakh.

After the operation, whether they found Armenian armed formations there or not, only I. Aliyev knows, but for some reason he is silent: they probably couldn’t set up something. The fact that on this basis, the Azerbaijani side is accumulating new forces near the border and again put in doubt the actions of the Russian peacekeeping forces.