Not So Much The Absolute Disrespect Of The Dictator Of Azerbaijan For Humanity, But The Indifference And Tolerance Of Civilized Humanity Is Surprising 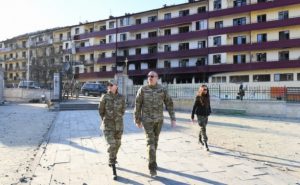 The scandal relating to the return of the Armenian PoWs, as the plane from Baku supposed to fly back Armenian PoWs landed in Yerevan empty, left no doubts that the Armenian PoWs are, in reality, hostages held by the Russian-Turkish tandem. The issue of hostages is a lever for provoking instability and decompose the army in Armenia, which was reflected in the developments of the recent days.

It should be noted that the Armenian servicemen were captured after the November 9 statement, with its violation, under suspicious conditions and in the presence of Russian peacekeepers.

Another essential circumstance should be noted. Baku’s aspirations to the town of Karmir Shuka have been noted for a long time now. The road to Shushi runs across this town, and Baku suggests releasing the PoWs in return for it. The president of Artsakh hinted on this, information came from other sources as well.

Interestingly, according to Baku’s sources, last time Aliyev left for Shushi in return for releasing Maral Najarian. Aliyev appears in Artsakh frequently, to keep up the “triumph euphoria”. Obviously, the Armenian PoWs are a “security guard” for him, and only while hiding behind their back does Aliyev dare set foot in Artsakh with his family. Baku does not rule out that otherwise Aliyev’s name may appear beside Enver’s name after another visit to Artsakh. Such an opinion about Baku’s cowardly leader is reinforced by facts of selfies with wife beside Armenian signs, orders to destroy Armenian churches and cemeteries.

Aliyev intends to visit Shushi again, this time with Erdogan who had a telephone conversation with Putin yesterday.