Statement by the Foreign Ministry of the Republic of Artsakh on the Occasion of the May Triple Holiday, 05.09.2021 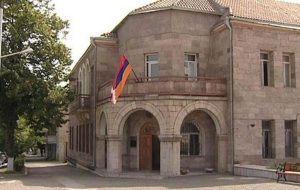 The ministry of foreign affairs of the Republic of Artsakh has issued a statement on May 12 on the occasion of the 27th anniversary of the trilateral, termless agreement on a complete ceasefire and cessation of hostilities in the Nagorno Karabakh conflict zone, the press service of the MFA stated.
STEPANAKERT, MAY 12, ARTSAKHPRESS:  The Artsakh MFA’s statement:

“Twenty-seven years ago, on May 12, 1992, a trilateral, termless  agreement on a complete ceasefire and cessation of hostilities signed between the Nagorno Karabakh Republic (Republic of Artsakh), Azerbaijan and Armenia entered into force. The signing of the document became possible due to the mediation efforts of the Russian Federation.

This agreement was preceded by a statement of the Council of CIS Heads of State dated April 15, 1994, calling for an immediate ceasefire, as well as the Bishkek Protocol of May 4-5, 1994, signed by the heads of the parliaments of Armenia, Azerbaijan, Nagorno Karabakh (Artsakh), Kyrgyzstan, the Chairman of the Federation Council of Russia, as well as the Plenipotentiary Representative of the Russian President on Nagorno-Karabakh and the head of Secretariat of the Council of CIS Interparliamentary Assembly.

Subsequently, the commitments to observe the ceasefire were repeatedly reaffirmed by the parties, in particular on July 26-27, August 29 and November 12, 1994, and were finally consolidated by the agreement on strengthening the ceasefire regime reached under the auspices of the OSCE on February 6, 1995. In April 2016, after a sharp increase in escalation caused by another armed attack of Azerbaijan on Artsakh, known as the Four-Day War, an agreement on cessation of hostilities and strict adherence to the ceasefire was again reached with the mediation of Russia.

The indefinite agreement, which put an end to the first armed aggression of Azerbaijan against the Republic of Artsakh and its people, was considered by the international community as a document binding on the signatory parties, as well as an important instrument to prevent the resumption of bloodshed in Nagorno Karabakh and create conditions for a peaceful settlement of the Azerbaijan-Karabakh conflict. The UN Secretary General, the OSCE Chairperson-in-Office, the Council of Europe Secretary General, as well as the OSCE Minsk Group co-chair countries have repeatedly stated the need to strictly observe this agreement, including through joint statements at the level of heads of state.

On September 27, 2020, in flagrant violation of the trilateral ceasefire agreement of May 12, 1994, and subsequent agreements, Azerbaijan unleashed a new full-scale military aggression against Artsakh with the direct involvement of Turkey and international terrorists.

By its actions, Azerbaijan violated the provisions of the UN Charter, as well as OSCE, Council of Europe and international commitments as a whole. In particular, Baku violated such fundamental principles as the non-use or threat of force, peaceful settlement of disputes, respect for human rights and fundamental freedoms, equal rights, including the right of peoples to decide their own destiny and the faithful implementation of obligations under international law.

The totality of the wrongful acts of Azerbaijan, including non-observance of the principle of pacta sunt servanda (agreements must be kept), unleashing a war of aggression, cooperation with international terrorists and their use to suppress by force the inalienable right of the people of Artsakh to self-determination, deliberate targeting of civilians and civilian objects with the use of prohibited types of indiscriminate weapons, torture and murder of Armenian prisoners of war, illegal detention of prisoners of war and civilian captives, destruction of cultural heritage and illegal occupation, constitute crimes, which entail international legal responsibility. The ceasefire achieved through the mediation of the Russian Federation on November 10, 2020, does not remove Azerbaijan’s responsibility for violation of their previous obligations, committed war crimes, mass atrocities and the ongoing systematic violations of the norms and principles of international law.

The outcomes of Azerbaijan’s latest armed aggression against Artsakh are illegal, since they were the consequence of illegitimate use of force, as well as gross violations of human rights committed by the Azerbaijani side. Baku’s attempts to consolidate the imposed in such a way and, therefore, unlawful current state of affairs cannot be accepted, have no prospects and must be condemned and rejected by the relevant international organizations, by all responsible members of the international community, since illegal acts do not create law.

Restoring lasting peace, in our view, implies redressing the consequences of the recent armed aggression, which includes the liberation of the occupied territories of the Republic of Artsakh, release and repatriation of Armenian prisoners of war and hostages, as well as conducting negotiations in good faith under the auspices of the OSCE Minsk Group co-chairmanship to achieve a comprehensive settlement of the Azerbaijan-Karabakh conflict”.