Congratulations of the Republic of Western Armenia (Armenia) on the occasion of New Year and Christmas, 01.01.2023 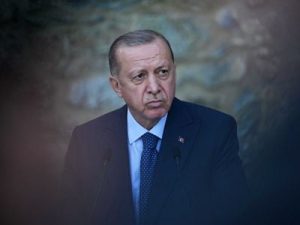 Every Democrat must wake up every morning knowing when his term is up. Every dictator should wake up knowing that today could be his last day. No one knows how or when Recep Tayyip Erdogan’s reign in Turkey will end. The arrest of his likely rival in 2023 makes a transition to democracy unlikely. A coup is also unlikely, and Turks are too frightened to rebel. More likely, colon cancer may finally take him, or an assassin’s bullet, writes Michael Rubin in his article for the National Interest.

“However Erdogan’s regime ends, its demise is a certainty. The Justice and Development Party (AKP) will not outlast its founder by more than a year or two. With the exception of Mustafa Kemal Atatürk’s Republican People’s Party (CHP), no political party founded or hijacked by a charismatic leader has survived that leader’s death. The AKP is already fracturing as Erdogan increasingly promotes family over party.

What Turks need to plan for, if not answer, is how they will undo the damage Erdogan has wrought. Some affairs they know, but much more remains hidden behind a bubble of silence left by Erdogan’s evisceration of Turkey’s once vibrant media. It is magical thinking to believe that Erdogan’s demise will see Turkey simply revert to the status quo ante. After all, Erdogan’s two decades in power allowed him to mold a generation. More than 30 million Turks went through school educated by an Erdoganist curriculum. He has reshaped the bureaucracy and transformed the military from a bastion of secularism to an engine of Islamism.

Here are the issues with which Turks must grapple the day after Erdogan’s removal or death.

First, will there be a purge? One of the more controversial moves after the 2003 invasion of Iraq was the decision to pursue de-Baathification. The Baath Party was a tool by which Iraqi president Saddam Hussein sought to control society and ensure his power. Advancement through its strict hierarchy required tests of devotion and moral compromise, though the rewards of loyalty could be great. Proponents of de-Baathification argued that a purge was necessary for both practical and moral reasons to prevent the Baathist old guard from undermining recovery from within and to provide openings for those who did not make moral compromises in pursuit of power and money. Opponents argued that co-opting Baathists was better than leaving them outside the system. Ultimately, U.S. and Iraqi authorities settled on the removal of the top four levels of the party, affecting perhaps 40,000 Iraqis out of a total party membership of 2 million. Some Iraqi politicians, however, went further in order to kneecap political rivals.

There needs to be a parallel discussion with regard to Turkey. Will AKP members keep their positions, or will their corruption and abuse of power disqualify them in a post-Erdogan future? Given the connection between AKP functionaries and groups like the Al Qaeda-affiliated Hay’at Tahrir al-Sham, Islamic State, or the SADAT paramilitary, could a purge lead to insurgency or a terror wave?

Even if a post-Erdogan government does not conduct de-Erdoganization, how will this government reverse his imprint on the bureaucracy and educational system? Prior to Erdogan, entry into Turkey’s top universities and bureaucracy was a meritocracy based on exam scores. Erdogan both awarded Imam Hatip (Turkish religious seminary) graduates a differential to inflate their scores relative to those attending secular high schools and universities and, when that was not enough, created an interview mechanism to push Islamists over the top. Will these unqualified bureaucrats retain their positions, or will they have to retest? The same holds true for teachers. Will those hired to “raise a religious generation” retain their positions?

Erdogan has surpassed the coup leaders he once criticized with the sheer scale and audacity of arrests. Close to 100,000 Turks are in prison for alleged complicity in the 2016 coup, the origins of which there remain more questions than answers. Many of those detained are alleged followers of exiled theologian Fethullah Gülen, whom Erdogan once embraced as an ally until he no longer needed Gülen’s financial or political networks. Then there are the many Kurds targeted. While he accused many of membership in the Kurdistan Workers Party (PKK), Erdogan targeted most for opposing his ethnic and religious chauvinism. Others languish in prison because they spent too much time in NATO or had Western education. The push to arrest political rivals like Selahattin Demirtas and Ekrem Imamoglu shows Erdogan to be a thin-skinned despot who realizes he cannot win an honest debate and has lost the support of the people. On Day One of the post-Erdogan-era, the prison gates should be opened and all political prisoners released.

Erdogan solidified his authoritarian grip upon the nation by changing the constitution. Turks must ask themselves whether they have had enough of dictatorship and want to restore a system of checks and balances. After President Franklin Delano Roosevelt won an unprecedented four terms, Americans of both parties worried that his feat would lay the groundwork for a future dictatorship. In response, Congress passed a constitutional amendment in 1947 to limit presidents to two terms. This Twenty-Second Amendment came into force four years later when Minnesota became the thirty-sixth state to ratify it. Immediately upon Erdogan’s death or ouster, Turks will need to decide the fate of their current constitution: perhaps they might return to the 1982 constitution, absent some or all of the 2017 revisions. At a minimum, they could amend their constitution, adding term limits to ensure that no dictator comes after Erdogan.

A related question will be the payment of pensions. Erdogan has weaponized pensions to impoverish political adversaries. Many military officers who served their country patriotically now live in poverty, their wives and children destitute. Erdogan’s animus is such that he will target any Turk who donates to them. Will a post-Erdogan Turkish government do the same to AKP functionaries and those in the Turkish General Staff who today serve a political party more than their country? Likewise, will a post-Erdogan government restore canceled pensions in their entirety and with interest?

Erdogan ruined lives with spurious tax liens, audits, and penalties to bankrupt political opponents or force them to sell companies, property, and media outlets. Will these seizures and fire sales stand? Or will businessmen victimized by Erdogan and his henchmen recover their previous property? Determining ownership of disputed properties will not be easy. If a board acts as a holding agent, what will be its composition and timeframe?

The flip side of the confiscation question is whether the new government will confiscate property belonging to Erdogan, his family, and his business partners. On one hand, there would be an element of justice to this, and it may be necessary to restore the Turkish middle class given how Erdogan has sought to monopolize key industries like construction. On the other, it perpetuates a cycle of vengeance that predates Erdogan. A related matter will be restitution. Erdogan has ruined lives with spurious charges. Will those incarcerated or the family members of those killed in prison or Erdoganist militias like SADAT be entitled to restitution? If so, from where?

All of these factors also point to the need for a Truth and Reconciliation Commission. While post-Apartheid South Africa’s commission is best known, there have been more than three dozen such entities, in countries ranging from South Korea to Sierra Leone, from Chile to Canada. A Truth and Reconciliation Commission could cover great ground in Turkey, addressing such issues as the origin of the coup, judicial corruption and bribery to empower the AKP, and security force abuse against Kurds and Alevis. Other topics might also include the assistance provided by the Turkish intelligence service to the Islamic State and other Syria-based terrorists, as well as false flag bomb attacks in Ankara and Istanbul. There might be a special forum for journalists to acknowledge the pressure under which they operated and, in some cases, the rewards they received for parroting Erdogan’s lies.

Should Erdogan die in office, the new Turkish government will face the question of how to bury him. Atatürk and his successor Ismet Inonu rest in a mausoleum in the heart of Ankara. Many other presidents and prime ministers lie are buried in various cemeteries in Ankara, Istanbul, Isparta, or Bursa. Not every leader, however, remains at rest. While the Iraqi government buried Saddam outside Tikrit in his home village, rumors swirl that militias made off with his body. Mohammad Reza Shah, Iran’s last shah, is buried in Egypt. His father Reza Shah’s body was only recently discovered in an unmarked grave near Tehran. A new regime might leave Erdogan’s grave unmarked to prevent it from becoming a pilgrimage site or simply to keep it safe from those who might wish to take out their animus upon his grave.

Not every decision a new Turkish leadership must make will be domestic. Erdogan has fundamentally remade Turkey’s foreign policy, reorienting Turkey away from the democracies of Europe and more toward the rejectionist regimes of the Middle East, and the revisionist countries in South America and Eurasia. Often, Erdogan incites anti-Americanism to appeal to the dark forces of Turkish conspiratorialism and xenophobia. It will take time before the international community embraces Turkey as a partner rather than a pariah, but a new leadership could signal a sharp break with Erdogan’s unique brand of thuggery by settling with the victims of the Sheridan Circle attack in Washington, DC. A new leader might also reverse the opening of Varosha and cease insisting on a two-state solution for Cyprus. Spurious maritime claims should end, as should overflights and revanchist claims to neighboring state territories.

One day, Turkey’s ruler will no longer be around. On that day, Turks will have to grapple with numerous complex issues.

Erdogan is Turkey’s most consequential leader since Atatürk, but his day of reckoning is coming. While Erdogan may have Turks cowed, Turks will no more submit themselves to decades of further dictatorship than the Iranians who today march in the street against the similar repression they face. Rather than try to out-Erdogan Erdogan in terms of xenophobia, paranoia, and grievance, Turkey’s future rests with the willingness of Turks from across the spectrum to say enough and turn to the task of restoring Turkey to its democratic path. The time to plan is now, for the change could come sooner than most Turks expect.”