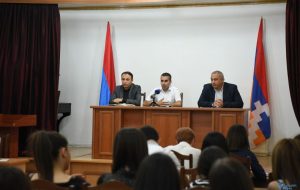 On September 19, a press conference entitled “Azerbaijan’s Genocidal Policy and War Crimes in 1918-2022” was held at the initiative of the Caucasus Studies Center of Stepanakert’s Mesrop Mashtots University.

According to Hovik Avanesov, the director of the Caucasus Studies Center, the artificial entity called Azerbaijan, which appeared on the political map of the world in 1918, was formed by usurping the historical homeland of the indigenous peoples of the region.

“Being a pan-Turanic project, Azerbaijan has adopted a policy of genocide, ethnic cleansing, xenophobia, war crimes, as well as the destruction and usurpation of the cultural heritage created by the indigenous peoples of the region over millennia. Its cornerstone is Armeniaphobia,” the speaker said.

He emphasized that since 1918, Azerbaijan has carried out numerous genocidal acts and ethnic cleansings against Armenians, aiming at eliminating Armenian statehood and civilization.

Artsakh Human Rights Defender Gegham Stepanyan expressed his conviction that in the face of Azerbaijan, the Armenian side is dealing with a country ruled by war criminals.

That country regularly carries out criminal activities, primarily targeting all Armenians in the world, particularly Armenians living in Armenia and Artsakh. We have witnessed the latest aggression recently, when Azerbaijan attacked the sovereign territory of the Republic of Armenia,” said Human Rights Defender, adding that Azerbaijan’s handwriting has not changed, and this situation is definitely the consequence and result of impunity.