Statement of NGOs of forcibly displaced people from the Republic of Artsakh, 29.08.2022 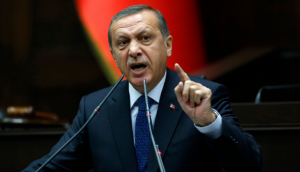 That’s where Turkey, a notorious state sponsor of international terrorism, has the sheer gall to accuse Finland and Sweden of supporting terrorists.

Even more bizarre: Neither Finland, Sweden, the U.S., NATO, EU, nor any country or leader has, to my knowledge, pointed out Ankara’s glaring hypocrisy.

Turkey claims that Finland and Sweden host members of the PKK, the militant Kurdish organization that the U.S. and EU regard as terrorists.  Both Nordic nations deny the charge.

Like many Europeans, however, Finns and Swedes sympathize with Kurds.  Turkey has long repressed and ethnically cleansed the latter.

Regardless, Ankara is blocking uber-civilized Finland and Sweden from joining NATO.

Ironically, Turkey — autocratic, infamously violative of human rights, and systemically corrupt — would be unqualified to join NATO today were it not already a member.

The point is, who is Turkey to accuse others of terrorism?

No objective analyst disputes Turkey’s longtime sponsorship of ISIS and other terrorist groups.

So why aren’t the U.S./NATO/EU exposing Turkey’s terrorism hypocrisy over Finland/Sweden?

Partly because America and Europe are schizophrenic about ISIS and similar groups.

While the West loudly condemns and occasionally battles such groups, it sometimes deems them to be militarily useful.

‘The enemy (Turkish-backed terrorists) of our (America’s) enemies (Assad/Russia/Iran/Hezbollah) is our friend.’

The U.S. dislikes, however, Turkey’s targeting the pro-American, anti-ISIS, Kurdish YPG in Syria.  Turkey insists that the YPG is an arm of the PKK.  However, America usually lets Ankara have its way with Kurds anyway.

Elsewhere, the U.S. House and European Parliament criticized Turkey’s using terrorists against Armenians in 2020.  Yet the West took no action against Turkey because Armenia, a Russian ally, lost the war.  This advanced America’s and NATO’s strategy of penetrating the Caucasus.

Even when America and Europe genuinely disagree with Ankara’s demands/threats, they rarely push back with their own counter-demands/counter-threats.

And, despite the boasts of pro-Turkish sycophants, Turkey is not more important, and certainly not more powerful, than the U.S./NATO/EU.

Instead of pushing back against Turkey over the Finland/Sweden fuss, NATO Secretary-General Jens Stoltenberg spinelessly implores us to empathize with Ankara’s demands.  Meanwhile, Finnish and Swedish delegations have scampered off to Ankara to prostrate themselves before His Royal Highness, King Erdogan.

Only rarely does the West counter Turkish mischief.  Turkey has been — temporarily, anyway — kicked out of America’s F-35 jet program because it bought Russia’s S-400 missiles.  Also, by applying economic penalties on Turkey, Washington won Pastor Andrew Brunson’s release in 2018.  But these happened only because the Pentagon unequivocally insisted on it and because Evangelicals pressured the White House.

Why should our (and NATO’s) servicemen and servicewomen spill their blood fighting a largely phony Global War on Terrorism, especially when NATO member Turkey outright supports terrorism?

Frankly, when it comes to Turkey, Western countries behave like weaklings.  What’s more, they don’t even realize it.

His work can be found at http://www.armeniapedia.org/wiki/David_Boyajian