NZHDEH, SYUNIK AND THE FUTURE OF INDO-EUROPEAN CIVILISATION, May 31, 2021 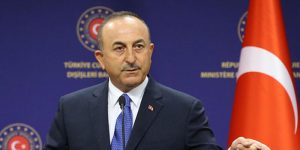 Turkish Foreign Minister M. Çavuşoğlu, speaking at a meeting of the UN General Assembly on Palestine, stated that the actions of the Israeli army against the Palestinian civilian population should be qualified as a war crime.

“Israel’s aggressive actions constitute a crime, and we must name the culprit. Today, only Israel is responsible for what happened in Jerusalem, in the West Bank and the Gaza Strip. The repetition of such tragedies cannot be prevented until Israel is not brought to justice and its sense of impunity is ended” stated Turkish minister.

Does Turkey have a moral right to speak on this topic? Does Ankara forget its actions against the people of Artsakh (Nagorno-Karabakh) during the 44-day war, during which, with the direct participation of the Turkish military, Armenian civilians were killed, hospitals and historical and cultural objects of Artsakh were shelled?

It is important to note that about 6 months have passed since the end of the hostilities, but the destruction of Armenian historical and cultural values continues to this day.

On April 24 of this year, commenting on the recognition of the Armenian Genocide in the Ottoman Empire by US President Joe Biden, President Recep Tayyip Erdogan spoke as follows: “If you are talking about genocide, then look in the mirror and assess yourself”.

So, Comrade Çavuşoğlu, follow the call of your president. Look in the mirror and assess your actions in Artsakh!

Now no one will argue that the Turkish-Azerbaijani tandem threatens not only peace in Armenia and Artsakh, but also in the entire region. Moreover, President Erdogan does not hide the fact that Turkey must be reborn and the Great Turan will stretch from the shores of the Mediterranean Sea to the outskirts of Asia. It is obvious that the Turkish expansion is a chronic disease that from time to time gives acute relapses and it is necessary to solve this problem once and for all through radical excision.