On the occasion of the 100th anniversary of the signing of the Treaty of Sevres, August 10, 2020

Someone flew over Ankara: Armenia breaks through isolation 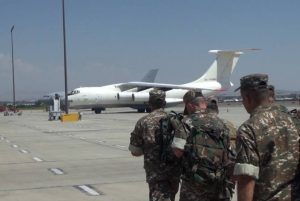 “It’s condemnable that Turkey is already obstructing the operations of peacekeepers within the NATO and the UN frameworks, simply because of its anti-Armenian positions. We have also raised this issue among our international partners through diplomatic channels”, she said.

The plane was on its route to Armenia to pick up Armenian peacekeepers serving under the German command in Afghanistan.

A Turkish air traffic controller spontaneously and without any explanation refused to grant a flight permit to the German military aircraft. Germany had to send the plane to Armenia on a longer route, using Russia’s airspace, managing to transport the Armenian peacekeepers already in mid-August.

Editing and Translating by Aneta Harutyunyan