The Senate of the Czech Republic adopted a Resolution condemning Nazi crimes against humanity and the Armenian Genocide, Katerina Eispurwit, May 20, 2020 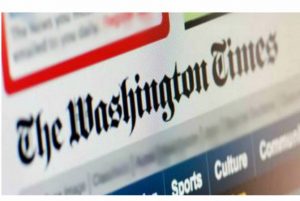 YEREVAN, MAY 26, ARMENPRESS. Artcile by Aram Hamparian, Executive Director of the Armenian National Committee of America (ANCA), titled “Azerbaijan Stands In Way Of Peace”, has been published in The Washington Times on May 24.

In his article, ANCA Executive Director Aram Hamparian says the Armenian side fully backs the Royce-Engel peace proposal, a bipartisan U.S. congressional initiative to deploy internationally monitored gunfire locators and add international observers along the line of contact. “It is Azerbaijan — and Azerbaijan alone — that is blocking these common-sense measures to promote transparency, precisely because it fears facing accountability for its ceasefire violations. It’s simple logic: Only the party initiating attacks would oppose the use of technology that identifies the ceasefire violator”, Hamparian said, adding: “Azerbaijan’s rejection of the Royce-Engel peace proposal represents the height of irresponsibility, raising the risk of a regional war amid a global pandemic”.

Let us remind that back to October 26, 2015 Chairman of the US House of Representatives Committee on Foreign Affairs Edward Royce and 85 members of various parties addressed a letter to US Co-Chair of the OSCE Minsk Group James Warlick, proposing to place OSCE-monitored, advanced gunfire-locator systems and sound-ranging equipment to determine the source of attacks along the Nagorno Karabakh line of contact.

Commenting on the propaganda article published by the Azerbaijani Ambassador to the US, Anna Astvatsaturian Turcotte in her article says she was born in Azerbaijan, and states that “Mr. Suleymanov does not write about Azerbaijan as we both know it, because he is a mouthpiece for a dictator”.

“Thirty years ago 350,000 Armenians lived in Azerbaijan, and many of them were murdered, maimed and/or raped. All were exiled. As a proud American and an elected official in the great state of Maine, I live and breathe the ideals of this country, and with those I vehemently reject Mr. Suleymanov’s blatant lies, anti-Armenianism and shameless propaganda.

The truth is that in today’s Azerbaijan there is no evidence of Armenian culture due to the systematic policy of ethnic cleansing and history erasure. In response to the Artsakh’s democratic movement of self-determination, everyone I knew was exiled, if not killed. My grandparents’ graves in Baku were destroyed, as were all Armenian cemeteries in Azerbaijan. My neighbors were killed, my relatives beaten. I was physically attacked at age 11”, the human rights advocate says.

She added that the lone Armenian church in Baku is a stark reminder of Azerbaijan’s true face. The Christian crosses of the church were removed.

The guise of a tolerant Azerbaijan is contradicted by U.S. State Department warning against any Armenians — even American citizens — visiting Azerbaijan. The newly released 2020 report of the U.S. Commission on International Religious Freedom recommends that Azerbaijan be added to the State Department’s special watchlist for severe violations of religious liberty.

The main obstacle to peace in the region is Azerbaijan. The ambassador’s op-ed is a desperate effort to distract attention from Azerbaijan’s continued gross human-rights violations towards Artsakh, Armenia and its own people. It is a confirmation for the people of Artsakh that the path of freedom and self-determination has no alternative. It is simply self-preservation”, Anna Astvatsaturian Turcotte said.