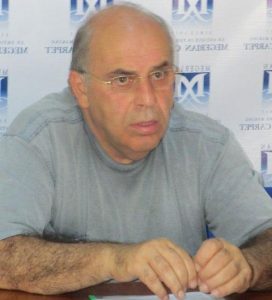 The coup against the government of Archbishop Makarios followed with the invasion of Turkish troops in Cyprus and occupation of its northern part in 1974 are links of a single chain of the conspiracy, that needs to be apprehended.

So, as the ideological heir to the Ottoman Empire, Turkey, like any ex-empire, tends to restore the bygone majesty and geopolitical position in the world, its supreme goal being “the Great Turan”. As Cyprus was one of the obstacles to the “great goal”, the landing of 30-thousand Turkish army in the northern part of the island and proclamation of the unrecognized Turkish Republic of Northern Cyprus were part of a general plan for global weakening of Greece as the centuries-old military adversary, and of Europe as a whole which is assumed to be also a probable adversary for Turkey.

Due to the occupation the possibilities of Greek military forces for operational – strategic maneuvering along the entire perimeter of southern coastline defense were critically reduced, and the southern strategic direction was blocked. The seizure of Cyprus closed the new frontline from Sinai to the Syrian-Turkish border and laid the grounds for planned elimination of another hotbed of Indo-European civilization and the Christian world.

That is why it is highly important to understand what political forces suddenly took the side of the Republic of Turkey and even pushed it to aggression in the seventies of the last century, when the world was divided between two world powers – the USSR and the USA? The possibility that it occured by mutual consent of both parties seems at first unexpected, since Greece and Turkey are allies of the USA and belong to the same military-political organization of NATO. For the USSR both the countries were assumed to be hostile and adherents of different political, economic, and ideological concepts.

Meanwhile, as a symbol of ancient culture spiritualized by the Orthodoxy and irrational Eurasionist mentality Greece could not but be a target for the United States, which noticeably degraded in its moral and ideological identity after assassination of Kennedy and sharp increase of the role of cosmopolitans in the power of the state.

Besides, being historically a heinous criminal state responsible for genocides of Greeks, Armenians, Assyrians (i.e., the descendants of the earliest civilizations of humanity) the Republic of Turkey is close in nature to the United States that also was established by genociding the indigenous population and was never noted for sublime creativity. That is why the rope connecting the two criminal states is actually much stronger than it may seem. And this link is in the very nature of both the states that would hardly ever recognize their crimes or the crimes of their partner. Nor would they be ever allowed to do so by the global cosmopolitan forces that are deprived of morality and rectitude and tenaciously hold both the states under control.

Having its own civilization history and moral values Greece is alien to cosmopolitanism – in contrast to mercenary Turkey that is alwais ready to execute any unlawful acts, The United States and its masters skillfully excite Turkey with the smell of blood, which it is ready to spill on Eurasian expanses for building the “Great Turan” and break, as in the Middle Ages, the cultural, commercial and economic ties of the Indo-European and Arab worlds. And it is again ready for any crime in the fulfillment of this bloody dream.

The young turks and bolsheviks begotten at the beginning of the last century were the uterine brothers of the same cosmopolitan mother. It is no longer a secret that at the dawn of their birth they both were financed by the same forces and individuals. Russia generously endowed the Turkish formations with its (and not only its) territories. The alphabets were designed for them and epical poems were created, medieval poets and thinkers of neighbouring ancient peoples were ascribed to them, the history was blasphemously falsified, industrial complexes were built and deserts irrigated, virgin lands were plowed and oil fields explored. Moreover, for biogenetic strengthening of Turkic peoples the interethnic and interconfessional marriages have been advocated.

But in reality the majority of the listed factors testify to the positive civilizational contribution of the USSR at the time, when Trotskyism as a Russian hypostasis of the cosmopolitanism receded. However, it conversely took over the country in the 60s, its obvious manifestation being given by the following three outrageous facts:

Thus, by sacrificing the interests of the peoples of Greece, Cyprus, and Armenia, along with other malpractices, the Soviet Union condemned itself to destruction as a larger sacrifice. And though the majority of experts associates the destruction of the USSR exclusively with financial and economic factors, it is thе matter of consistent betrayal on the geopolitical scene during the last several decades. Rome does not pay to traitors, and the Soviet Union, which sacrificed the national interests of the Greeks and Armenians, also fell victim to the same destructive power of cosmopolitan forces.

However, not everything is lost. The continuous struggle of the Greeks for liberation of Cyprus (as well as of the Armenians in Artsakh) demonstrates to the world that the ststriving of peoples for a just cause will lead to a triumph of justice. The day of inglorious termination of the blasphemous event,- the occupation by Turkey of a part of Cyprus, i.e. the part of the territory sanctified by the “Ode to Joy” of the European Union – is not far off. And the nations of heroes – the Greeks, Armenians, Serbs and other honest nations, will achieve justice. It will happen before or after the collapse of the EU, history will show. And its logic is inexorable.

Chairman: Organizations of the Greeks of Armenia and Artsakh (Nagorno-Karabakh) “Patrida”,

Member of the National Assembly (Parliament) of Western Armenia