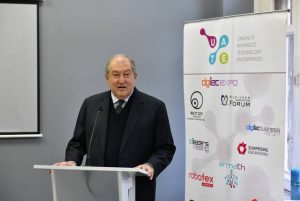 Leading scientists and experts from different countries of the world arrived in Armenia to participate in the conference and discuss the global trends and challenges of evolution, scientific and technological discoveries.

In his welcoming remarks the President attached importance to holding this conference in Armenia, stating that Armenia can become an attractive center for leading science, research and development.

“Our country’s future has been and will continue to be linked with that of the world”, the President said. “And the future of the world moves further to innovation, use of science and technological discoveries in our daily life”.

Any scientific conference can be positive and negative, and we know this very well. Starting from hammer up to discovery of nuclear energy can serve the people, but at the same time they can also serve the elimination of humanity”.

Introducing his vision on Armenia’s future, the President said it is connected with the future of the humanity. “We need to understand where the humanity moves on, where it will be in 20, 30, 40 and 50 years”, Armen Sarkissian said. “And we, Armenia, must decide what is going to be our role in that world. What we are going to produce, sell, with whom we are going to do trade, be that a good or an idea. And your conference is an important step for exchanging ideas on the future. I am sure that the future of the world and Armenia should be closely linked with the new technologies, with those technologies which will emerge not in 10-20 years, but with the technologies which we have today and will develop tomorrow.

We need to work hard and assure that we are moving forward in line with the world in terms of science, technologies and human behavior.

Everything becomes more and more integrated. Each farmer should use artificial intelligence, new laser technologies in order to be effective in this world. Or each doctor should also have an understanding of technologies because eventually the efficiency of healthcare will depend on the artificial intelligence, digital technologies and new biological discoveries. Every scientist, who today conducts fundamental research, eventually wants his discovery to make applicable not in 100 years, but tomorrow”, the President said, assuring that in 10-20 years Armenia will become one of the world’s most leading countries. “This is ambition, dream, but dream starts from small steps. And one of these steps is to invite here renowned scientists who are leading in their fields, in mathematical modeling, evolution and artificial intelligence. I am very happy for this fact. I wish good luck to the conference”.

Edited and translated by Aneta Harutyunyan