«Blood borders. How a better Middle East would look» 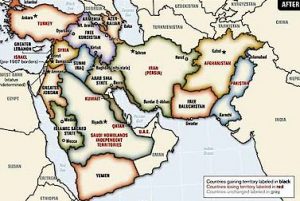 How a better Middle East would look

International borders are never completely just. But the degree of injustice they inflict upon those whom frontiers force together or separate makes an enormous difference — often the difference between freedom and oppression, tolerance and atrocity, the rule of law and terrorism, or even peace and war.

The most arbitrary and distorted borders in the world are in Africa and the Middle East. Drawn by self-interested Europeans (who have had sufficient trouble defining their own frontiers), Africa’s borders continue to provoke the deaths of millions of local inhabitants. But the unjust borders in the Middle East — to borrow from Churchill — generate more trouble than can be consumed locally.

While the Middle East has far more problems than dysfunctional borders alone — from cultural stagnation through scandalous inequality to deadly religious extremism — the greatest taboo in striving to understand the region’s comprehensive failure isn’t Islam but the awful-but-sacrosanct international boundaries worshipped by our own diplomats.

Of course, no adjustment of borders, however draconian, could make every minority in the Middle East happy. In some instances, ethnic and religious groups live intermingled and have intermarried. Elsewhere, reunions based on blood or belief might not prove quite as joyous as their current proponents expect. The boundaries projected in the maps accompanying this article redress the wrongs suffered by the most significant “cheated” population groups, such as the Kurds, Baluch and Arab Shia, but still fail to account adequately for Middle Eastern Christians, Bahais, Ismailis, Naqshbandis and many another numerically lesser minorities. And one haunting wrong can never be redressed with a reward of territory: the genocide perpetrated against the Armenians by the dying Ottoman Empire.

Yet, for all the injustices the borders re-imagined here leave unaddressed, without such major boundary revisions, we shall never see a more peaceful Middle East.

Even those who abhor the topic of altering borders would be well-served to engage in an exercise that attempts to conceive a fairer, if still imperfect, amendment of national boundaries between the Bosporus and the Indus. Accepting that international statecraft has never developed effective tools — short of war — for readjusting faulty borders, a mental effort to grasp the Middle East’s “organic” frontiers nonetheless helps us understand the extent of the difficulties we face and will continue to face. We are dealing with colossal, man-made deformities that will not stop generating hatred and violence until they are corrected.

As for those who refuse to “think the unthinkable,” declaring that boundaries must not change and that’s that, it pays to remember that boundaries have never stopped changing through the centuries. Borders have never been static, and many frontiers, from Congo through Kosovo to the Caucasus, are changing even now (as ambassadors and special representatives avert their eyes to study the shine on their wingtips).

Oh, and one other dirty little secret from 5,000 years of history: Ethnic cleansing works.

Begin with the border issue most sensitive to American readers: For Israel to have any hope of living in reasonable peace with its neighbors, it will have to return to its pre-1967 borders — with essential local adjustments for legitimate security concerns. But the issue of the territories surrounding Jerusalem, a city stained with thousands of years of blood, may prove intractable beyond our lifetimes. Where all parties have turned their god into a real-estate tycoon, literal turf battles have a tenacity unrivaled by mere greed for oil wealth or ethnic squabbles. So let us set aside this single overstudied issue and turn to those that are studiously ignored.

The most glaring injustice in the notoriously unjust lands between the Balkan Mountains and the Himalayas is the absence of an independent Kurdish state. There are between 27 million and 36 million Kurds living in contiguous regions in the Middle East (the figures are imprecise because no state has ever allowed an honest census). Greater than the population of present-day Iraq, even the lower figure makes the Kurds the world’s largest ethnic group without a state of its own. Worse, Kurds have been oppressed by every government controlling the hills and mountains where they’ve lived since Xenophon’s day.

The U.S. and its coalition partners missed a glorious chance to begin to correct this injustice after Baghdad’s fall. A Frankenstein’s monster of a state sewn together from ill-fitting parts, Iraq should have been divided into three smaller states immediately. We failed from cowardice and lack of vision, bullying Iraq’s Kurds into supporting the new Iraqi government — which they do wistfully as a quid pro quo for our good will. But were a free plebiscite to be held, make no mistake: Nearly 100 percent of Iraq’s Kurds would vote for independence.

As would the long-suffering Kurds of Turkey, who have endured decades of violent military oppression and a decades-long demotion to “mountain Turks” in an effort to eradicate their identity. While the Kurdish plight at Ankara’s hands has eased somewhat over the past decade, the repression recently intensified again and the eastern fifth of Turkey should be viewed as occupied territory. As for the Kurds of Syria and Iran, they, too, would rush to join an independent Kurdistan if they could. The refusal by the world’s legitimate democracies to champion Kurdish independence is a human-rights sin of omission far worse than the clumsy, minor sins of commission that routinely excite our media. And by the way: A Free Kurdistan, stretching from Diyarbakir through Tabriz, would be the most pro-Western state between Bulgaria and Japan.

A root cause of the broad stagnation in the Muslim world is the Saudi royal family’s treatment of Mecca and Medina as their fiefdom. With Islam’s holiest shrines under the police-state control of one of the world’s most bigoted and oppressive regimes — a regime that commands vast, unearned oil wealth — the Saudis have been able to project their Wahhabi vision of a disciplinarian, intolerant faith far beyond their borders. The rise of the Saudis to wealth and, consequently, influence has been the worst thing to happen to the Muslim world as a whole since the time of the Prophet, and the worst thing to happen to Arabs since the Ottoman (if not the Mongol) conquest.

While non-Muslims could not effect a change in the control of Islam’s holy cities, imagine how much healthier the Muslim world might become were Mecca and Medina ruled by a rotating council representative of the world’s major Muslim schools and movements in an Islamic Sacred State — a sort of Muslim super-Vatican — where the future of a great faith might be debated rather than merely decreed. True justice — which we might not like — would also give Saudi Arabia’s coastal oil fields to the Shia Arabs who populate that subregion, while a southeastern quadrant would go to Yemen. Confined to a rump Saudi Homelands Independent Territory around Riyadh, the House of Saud would be capable of far less mischief toward Islam and the world.

Iran, a state with madcap boundaries, would lose a great deal of territory to Unified Azerbaijan, Free Kurdistan, the Arab Shia State and Free Baluchistan, but would gain the provinces around Herat in today’s Afghanistan — a region with a historical and linguistic affinity for Persia. Iran would, in effect, become an ethnic Persian state again, with the most difficult question being whether or not it should keep the port of Bandar Abbas or surrender it to the Arab Shia State.

What Afghanistan would lose to Persia in the west, it would gain in the east, as Pakistan’s Northwest Frontier tribes would be reunited with their Afghan brethren (the point of this exercise is not to draw maps as we would like them but as local populations would prefer them). Pakistan, another unnatural state, would also lose its Baluch territory to Free Baluchistan. The remaining “natural” Pakistan would lie entirely east of the Indus, except for a westward spur near Karachi.

The city-states of the United Arab Emirates would have a mixed fate — as they probably will in reality. Some might be incorporated in the Arab Shia State ringing much of the Persian Gulf (a state more likely to evolve as a counterbalance to, rather than an ally of, Persian Iran). Since all puritanical cultures are hypocritical, Dubai, of necessity, would be allowed to retain its playground status for rich debauchees. Kuwait would remain within its current borders, as would Oman.

In each case, this hypothetical redrawing of boundaries reflects ethnic affinities and religious communalism — in some cases, both. Of course, if we could wave a magic wand and amend the borders under discussion, we would certainly prefer to do so selectively. Yet, studying the revised map, in contrast to the map illustrating today’s boundaries, offers some sense of the great wrongs borders drawn by Frenchmen and Englishmen in the 20th century did to a region struggling to emerge from the humiliations and defeats of the 19th century.

Correcting borders to reflect the will of the people may be impossible. For now. But given time — and the inevitable attendant bloodshed — new and natural borders will emerge. Babylon has fallen more than once.

Meanwhile, our men and women in uniform will continue to fight for security from terrorism, for the prospect of democracy and for access to oil supplies in a region that is destined to fight itself. The current human divisions and forced unions between Ankara and Karachi, taken together with the region’s self-inflicted woes, form as perfect a breeding ground for religious extremism, a culture of blame and the recruitment of terrorists as anyone could design. Where men and women look ruefully at their borders, they look enthusiastically for enemies.

From the world’s oversupply of terrorists to its paucity of energy supplies, the current deformations of the Middle East promise a worsening, not an improving, situation. In a region where only the worst aspects of nationalism ever took hold and where the most debased aspects of religion threaten to dominate a disappointed faith, the U.S., its allies and, above all, our armed forces can look for crises without end. While Iraq may provide a counterexample of hope — if we do not quit its soil prematurely — the rest of this vast region offers worsening problems on almost every front.

If the borders of the greater Middle East cannot be amended to reflect the natural ties of blood and faith, we may take it as an article of faith that a portion of the bloodshed in the region will continue to be our own.

WHO WINS, WHO LOSES